25% of wireless cameras get returned.

WiFi cameras are extremely popular, but part of our commitment is to provide what is best for people rather than just the easiest thing to sell.

There are many companies that sell wireless cameras. However, most of those cameras do not perform the way that consumers expect.

Before we get started talking about WiFi cameras, let's make sure we're on the same page. There are three wireless technologies that cameras most often use: radio, WiFi, and point-to-point line-of-sight beam technologies.

Radio Frequency cameras send analog video over radio signals. They are essentially the video version of a walkie-talkie. The quality looks like a 1990's cell phone.

We don't recommend (or sell) the radio frequency technology because it doesn't actually work for security. The resolution is too low and the connection too prone to static. Savvy consumers shouldn't even consider radio-based security cameras as an option.

If you want to know more about long-range, military-grade, point-to-point, WiFi beam technologies, check out the guide and video here.

Ok, back to our guide on wifi security cameras.

SCW does sell one of these, but it is important to know how consumer-grade WiFi cameras work in order to use it as it was designed.

Just like with radiofrequency cameras, consumers are often disappointed with WiFi cameras, as seen by most WiFi camera reviews.

Why people are often disappointed with WiFi cameras

1. WiFi cameras only work where you have a WiFi signal that connects back to your WiFi router.

Exterior walls block and degrade WiFi signals. They will cause your cameras to disconnect and not show any video.

Here's what the average signal strength looks like in a small home: 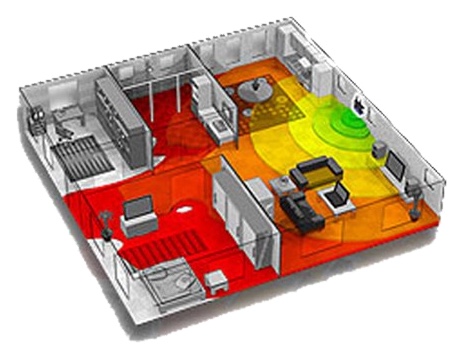 Moving away from the yellow sections of this signal strength map, connections are more likely to drop for a second or two. This isn’t apparent when watching a video from the Internet because it pre-loads the video. Security cameras cannot preload videos. Therefore, moving an IP camera farther away from the router will make it more likely to drop the connection, resulting in missing sections of video, or a slower connection making the camera unable to transmit HD video in realtime and thereby switching to low-quality video.

The people who cannot get them to work are placing them in the red sections of the WiFi heatmap and the people who are problem-free have their cameras in the green or yellow areas of their homes.

Normal, wired HD IP cameras have one wire that sends both power and video. Normal "wireless" security cameras (not battery-powered wire-free security cameras) still need power and must be plugged into a wall outlet.

This can be unplugged.

What about Wire-Free Cameras?

Here's a guide on the Pros and Cons of Battery Powered, Wire-Free Security Cameras.

3. Wireless Signal can be purposely jammed: 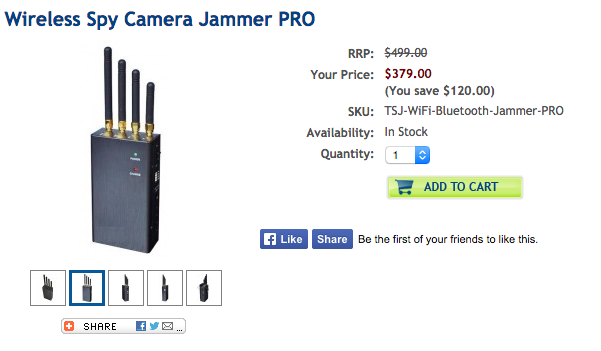 This device blocks WiFi signals, Bluetooth, GPS, and other signals. It is portable and fits in your pocket. Since most alarms run on one of these wireless technologies, it is a favorite item of people who are going to break into a home.

Because of this product (and the many more like it), we recommend never using WiFi cameras for security purposes.

Also, here are three different videos by three different people who are using other methods to disrupt or disable WiFi networks with smartphones or wireless landline phones.

Example Video 1: How To Build A Portable WiFi And Bluetooth Jammer with a Wireless Landline Phone

Example Video 2: How To Jam WiFi with an Android Cell Phone

Example Video 3: How To Jam WiFi with an App called "WiFi Kill"

How often do you have a bad experience with FM radio? Static or cross talk on FM radio occurs rather frequently and is caused when the signal overlaps another signal. There are over 100 non-overlapping FM radio frequencies.

WiFi was legally created when the FCC gave digital systems the ability to use part of the radio spectrum to send data. It works in the same way as FM radio but sends digital signals rather than analog. 2.4Ghz WiFi has three non-overlapping WiFi frequencies.

You should therefore expect to have interference and disruptions in your signal with WiFi.

Have you ever seen a spy movie where the hero (or bad guys) replaces the video feed of a security camera with a duplicate, fake feed? This is an example of a man-in-the-middle attack.

Man-in-the-middle attacks are impossible on hardwired systems. It would involve having to cut a wire, splice it, put a device in between the camera and the recorder/viewer, give that device a web-address that the firewall can accept, and do this all without anyone being aware of any interference. Most modern surveillance systems (ours included) have automatic emails and auditory alerts that tell you when a cable has been cut or damaged.

Wireless, however, makes man-in-the-middle attacks very easy to execute since all that is required is to spoof the end device's address and send the data in the same format.

You're probably saying "A homeowner would really never need to worry about man-in-the-middle attacks." You would be wrong.

In 2018, a huge number of consumer-grade cameras were hacked and were utilized in a large scale man-in-the-middle hacking attempt. Unlike in the spy example, where the man-in-the-middle was a device in between the user and the camera designed to feed fake video to the viewer, most real examples of man-in-the-middle attacks don't care about video data.

Hackers don't want to watch your videos, they care about your financial data.

The consumer camera hacks that started appearing in 2018, positioned the camera in between the users’ inputs (passwords, email addresses, banking logins, credit cards) and the internet. In these hacks, the camera's software was modified to be used as the man-in-the-middle to collect and transmit financial data back to the hacker(s).

SCW solves this issue by creating a separate air-gapped (military term for “completely isolated”) network through our recording devices (NVRs). This means that when connected to the NVR, you can watch your camera's footage, but there's no way to remotely execute code on the camera since the camera is not on your computer network.

Conclusion: WiFi cameras are really only meant to be used as baby or pet monitors. They are NOT meant for security.

Q: What's the range of a Wifi camera?

The range is not actually a function of the camera, as much as it is of your wifi router. There are different speed and ranges for the different levels of wifi on router. The camera is receiving the signal (and transmitting back), but has to be in range of the signal that your router is transmitting.

So, the distance actually depends upon what router you have and your environment as walls, microwave ovens, cordless phones, and other appliances can shorten the range. Here’s a the approximate ranges in different environments for different speeds.

A B router will have an average indoor range of 115ft and an outdoor (unobstructed) range of 300 ft.

A G router will have an average indoor range of 115ft and an outdoor (unobstructed) range of 460 ft.

An N router will have an average indoor range of 230ft and an outdoor (unobstructed) range of 820 ft.

Inside the camera is a N wifi receiver (it will also work with G or B because it is backwards compatible - but B is pretty slow, so I would make sure you’re using a G or N router if you want HD video.), so if you have an AC router the camera will use the N connection speed and range.

You can also buy wifi range extenders (here’s a model for example, but you'll need to get one that’s the same brand as your router).

Although installation may seem easier with Wi-Fi cameras - Wi-Fi cameras require more maintenance than wired cameras. Wireless cameras by nature are less reliable than a wired cameras, we recommend wiring cameras whenever possible. All of our Wi-Fi equipped cameras are also able to be wired with Cat5 for optimal performance.

Wi-Fi cameras are not battery powered or equipped - they require power via ethernet or by a DC power adapter - please keep this mind for installation.

If you have needs that go beyond consumer grade wifi, we carry military grade Wifi solutions (not available in stores) that can transmit up to 3 Miles but require line-of-sight (no obstructions).

You can add this sort of wifi to your NVR / cameras, these technologies only really works outdoors, and probably won’t fit your needs if this is for home use. They are surprisingly not as expensive as you might think, but they are difficult to setup.

Here's an excellent promo video on the product: