Here at SCW, we actually recommend that you get your cable locally!

Why? Two reasons: (1) you can start your installation immediately and have the cable run by the time your cameras are delivered! (2) The cable is heavy, expensive to ship, and you can often buy it locally for cheaper.

Our camera systems use generic Cat5e or Cat6 cable, so you can buy it almost anywhere including any computer store, but also most home improvement stores have them. You can also buy it from us, if you just don't want to deal with the hassle or if it sounds like we're speaking in French right now.

When using the cable indoors, the best idea is to just use a booted Cat5e/Cat6 cable. The reason that you want a booted cable is that Cat5/Cat6 cable has eight tiny twisted cable pairs inside of it, and the boot helps prevent breakage of these tiny cables. With an unbooted cable, the plastic RJ45 connector has the possibility of cutting the cable if it is at a 90-degree angle. Most pre-made cable available anywhere comes booted, and all our premade cables are booted. The benefits are small, however, and as long as you aren't putting a ton of pressure from a 90-degree angle on the cable by the RJ45 connector, you should be fine even using an unbooted cable. 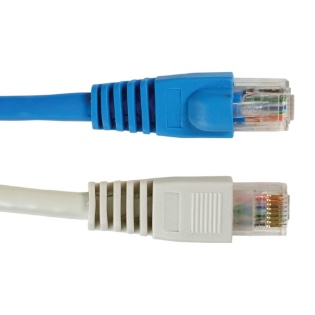 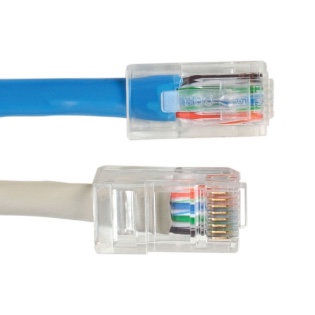 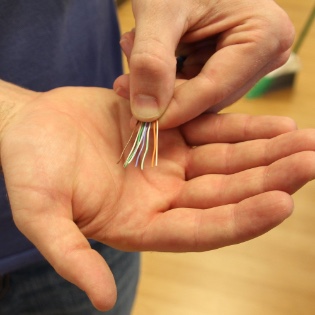 When using the cable outdoors, you will want to do two things: (1) use the waterproof connector included with every camera and (2) use an electrical mounting box (available for most of our cameras).

Every outdoor rated camera that we carry comes with a waterproof connector (shown below and described in this installation guide). Without this protective seal, the camera's RJ45 connector can corrode and present connection issues.

Because the waterproof connector is rather large, most of our cameras have an optional electrical mounting box to coil up the excess cable. This allows you to easily access the cable connection in the future, not have to drill as large of a hole in your exterior wall, and save some money on heating/cooling.

Using the waterproof connector does require removing the RJ45 connector and putting a new one on the cable. We have a guide on making Cat5/Cat6 cable for our cameras (hint: just make normal cables), RJ45 connectors, and the RJ45 Crimper. 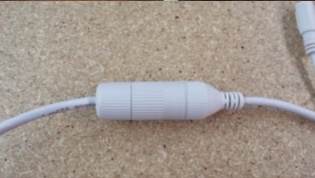 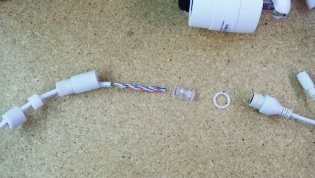 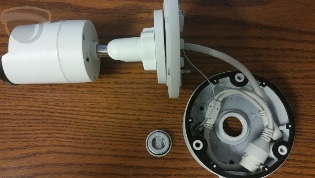 You'll notice that we have two types of bulk cable--CCA and Full Copper (Commercial grade). If you are running any cable long distances, please use the Full Copper cable. CCA stands for Copper Clad Aluminum, whereas "Commercial Grade" cable is 100% copper. We have a guide on making Cat5/Cat6 cable for our cameras (hint: just make normal cables), RJ45 connectors and the RJ45 Crimper.

We don't carry "burial" cable, because we think it is a waste of money. There's no standard definition as to what "burial" cable even is. There are a million different physical changes to the cable that someone could mean, such as a copper mesh, rubber tubing, etc that manufacturers mean when they say "burial" cable. If you are going to bury cable put in conduit. No one has come up with a burial cable that really stands up to being outside without conduit and we don't think anything out now stands up to the promises being made about the cable. For example, rubber tubing inside the cable helps protect against moisture but does nothing about roots growing into it, insects infesting it, rodents chewing on it, or lawnmowers/weed whackers damaging it. The copper mesh helps with weed whackers, rodents, and some inserts, but doesn't help against moisture, lawnmowers, roots, etc. In short, there are some good ideas floating out there that solve some specific problems, but nothing that will really work well enough outdoors to forgo using conduit.

The Shielded vs Unshielded Debate

There are people who say shielded is better as it prevents "cross-talk” between the different cables a bit more effectively, but modern networks weed that out anyway. There's an ongoing debate about this. We think the cross-talk problem is overblown for general, small-scale computer networks and totally unimportant for cameras (if you are an ISP, these issues are a much bigger deal and matter). Cameras only use 0.5% to 5% of a Cat5e’s total capacity, and “cross-talk” isn’t that big of a deal when you aren’t utilizing the entire throughput.

Also, shielded Cat5/Cat6 does not bend easily, so it is very hard to install. We stay away from shielded, as a company, but the network community is divided. Our systems will work with shielded or unshielded, so feel free to do whatever you want.

Cat5e vs Cat6 - What's the difference?

A 4MP camera needs about 6 Mbps when recording at 20 FPS. So, a single 4MP camera is only using 0.6% of the capacity of Cat5e cable.

Both cables have a ton of growth potential in terms of spare transmission space for resolution upgrades, which is one of the reasons that IP cameras are popular. When the camera’s resolution increases in five years, you should still be able to use the same cables. Cat5e is fine for most installs when run from the camera to the NVR. If you are going to use a more complex setup such as the types that we recommend with our executive or edge series lines or are using the cable to setup a combined camera and computer network, you might want to use Cat6.