What they don't tell you about "License Plate Cameras"

What they don't tell you about "License Plate Cameras"

The term "License plate camera" has no consistent definition in the industry.

At SCW, we try not to use the term "License Plate Camera" because of the confusion with Automatic License Plate Recognition Cameras. Although there are cameras that are better or worse at license plate capture, most people get confused and think that the camera will recognize and catalog the characters seen by the camera.

A "License plate camera" is NOT the same thing as an automatic license plate recognition (ALPR) service or ALPR camera.

License plate capture is not to be confused with ALPR (automatic license plate recognition) which uses computer vision to read determine whether a license plate is present and where it is in the video and then OCR (optical character recognition) to read the number or letters on that plate.

Most "license plate cameras" do not have ANPR.

However, some companies have started trying to make cameras that can do ANPR* internally, but so far those returned poor results with low accuracy rates. Although manufacturers often state that they are 99% accurate, the best on-camera (i.e. no separate service you have to pay for) LPR OCR character recognition are laughably inaccurate for US based license plates.

The truth is that either those 99% accuracy ratings are probably wholly made up by marketing departments.

ANPR cameras test usually use perfect conditions, such as a perfect angle of view, and are based on foreign, mostly chinese plates who use white backgrounds with black text, that never hold up to real world situations in the USA. (There's significant variety in the design of plates, and each state may have hundreds of different background color, text color, letter orientation, text size, and imagery combinations.)

Error rates are often described as the percentage change to get any characters wrong, not failing to get the whole 7 or so characters on the plate correct.

Real world use of on-camera LPR OCR also suffers from collecting and databasing the wrong data (such as "How am I driving?" phone numbers and marketing text on company vehicles), partial data capture (such as only discerning some of the letters/numbers), and missing data issues (inability to recognize plates at all on anything at an angle or vehicles moving faster than 20 MPH).

For good results, use a ALPR service

Unlike most machine learning products, most on-camera LPR OCR get worse every year. Because there's no monthly or yearly fee, there's no incentive to update the machine learning models even as every state releases several new vanity plates per year.

You want to use a SAAS based service if you want to have good results. The monthly fee is important because you want a product that is being maintained.

SCW has partnered with the best ALPR service around, and we're happy to make an introduction to you with the the industry leader in Automatic License Plate Recognition (ALPR) Technology.

What makes a camera better at capturing license plates?

There are a series of technological innovation to improve digital images of license plates (getting a good enough photo to accurately see a license plate). Though it sounds simple, it is surprisingly difficult.

Let's look at the different specs that can increase the likelihood of capturing a workable image of a license plate to use in an LPR application. Then we’ll examine the environmental and lighting considerations you need to take into account when installing a camera to get good quality footage.

What Specs are important to License Plate Capture?

The quality of the image that you are capturing is, of course, the most important factor in being able to read a license plate. The higher the resolution and the more narrow your field of view, the greater the distance from which the plate can be read.

Every single product that we sell has pictures of a license plate at different distances so that you can tell which resolution/lens combination best fits your needs. 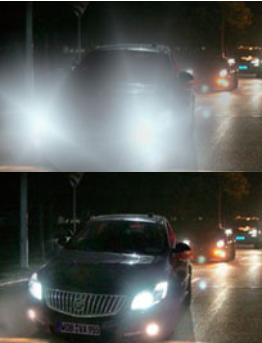 HLC reduces glare and overexposure due to vehicle headlights that directly point into the camera. The problem is that many cheap camera companies claim any camera with Headlight Compensation (HLC) is a "License Plate Camera" including those that don't record in HD. Don't get us wrong, headlight compensation is a necessary spec required to capture front-facing license plates, but by itself, HLC isn't enough.

Almost all SCW cameras have headlight compensation (HLC) and it would be inaccurate to call every product a specialty "License Plate Camera." 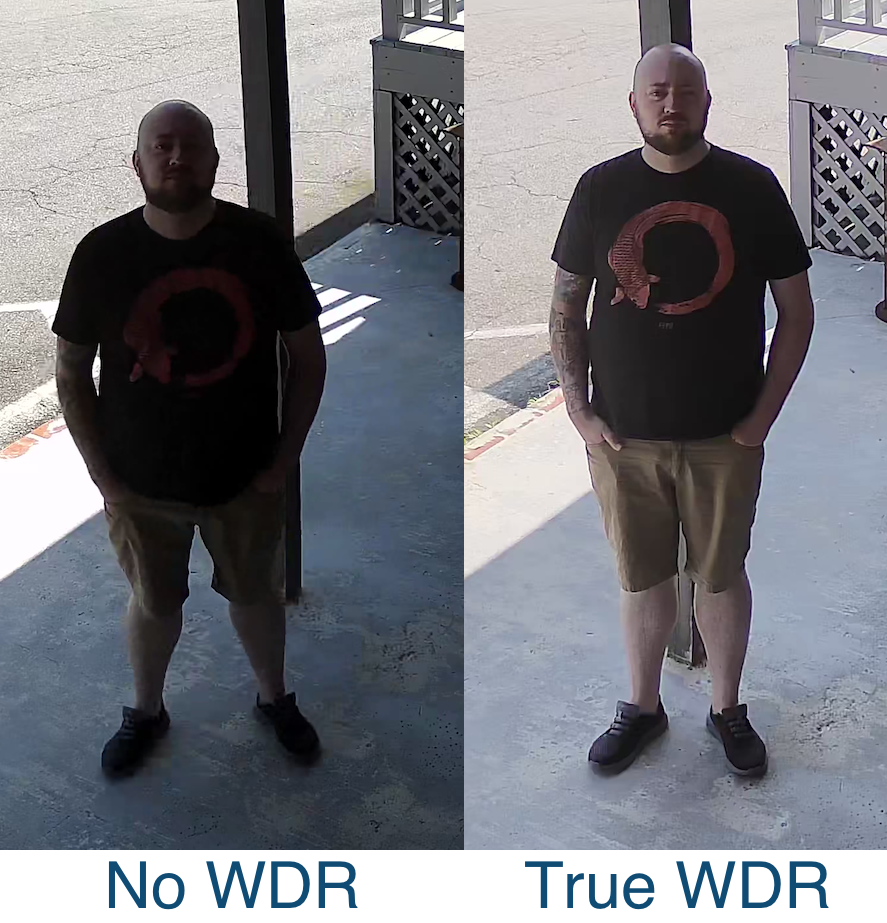 Instead of using just one set of settings for saturation, brightness, contrast, and sharpness levels, Wide Dynamic Range splits each frame/image into many sections and determines the correct exposure to create a consistent and balanced image. WDR is very useful when recording in situations where different areas of the same scene are going to have varied lighting levels. Most situations where you want to record license plates are going to have these light variations because of headlights and streetlamps.

Every camera (including security, movie, and regular cameras) operates the same way--a shutter opens which allows light to be absorbed by the image sensor. Then the shutter closes allowing it to take the next picture. When recording video, these pictures are taken so quickly that your brain perceives them as fluid, but a movie camera, camcorder, or security camera are all just taking rapid pictures.

The shutter in a camera controls how long the camera requires to take a picture, though faster doesn't mean better. The faster a camera shutter opens and closes, the more likely that you will get a clear, blur-free image. The longer that the shutter is open, the more light is let in and the better the image will be in low light. Shutters that are open for an extremely long time allow the taking of color pictures at night/twilight without having to switch to infrared mode, but will cause motion blur.

There is no one-size-fits-all approach to any situation. This is especially true when trying to record license plates because of both a fast-moving object (the car) and the need for detail in low-light situations.

The Right Specs are Necessary, but...

License plates come in tons of different background and text color combinations, character sizes, and have many variables that change the amount of light that will be reflect off of the plate. At the bare minimum, it is best to have cameras that have WDR, adjustable shutter speed, and headlight compensation.

Getting a quality Bullet Camera is important, but does not reduce the need to install the camera in an optimal angle of view, facing an area with adequate lighting.

1. IR Night Vision is a liability with License Plates

Infrared night vision is actually a liability rather than a benefit when trying to record the highly light reflective paint used in license plates.

What you really need is to have a light source which uses full spectrum, natural, ambient light rather than the infrared light used by the camera (IR light is very reflective and combined with the reflective paint used in license plates can reflect too much light and wash out a ). The most effective deployments of license plate capture design their building around their objective, such as guard posts and parking ticket booths. Nothing is going to beat designing your building around capturing plates, but our Knight camera uses an internal PIR sensor to switch from IR to full spectrum, natural white light.

2. Car Bumpers and SUV Contours limit how high you can mount a camera.

To capture license plates reasonably well, the camera must be less than 30 degree angle above the target. If your camera is too high on the wall, the bumper or a SUV's tail end may block your view of the plate on certain car or truck models. Also, as we're about to talk about with horizontal angles, your brain may not be able to read the characters if they are more than a 30 degree angle downward.

Ideally, you want the camera to be slightly lower than the car so that it is exactly flush with the plate.

3. A small change in the angle of a plate can make the text/numbers very hard to read

People have surprisingly limited experience reading text that is not directly facing them and it can very, very hard to read text that is tilted in some way. In this example, the text is only about 15 degrees rotated and it is significantly harder to read the last two characters, despite being the same size and distance. 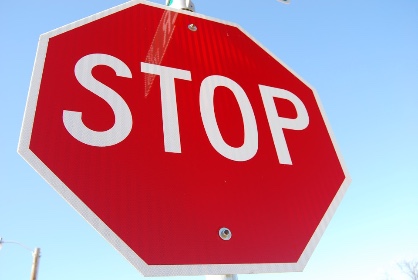 Ideally you want the vehicle to come to a full and complete stop, or at least slow down to under 5 MPH, within 20 feet of the camera. The slower that the vehicle is moving, the longer your shutter can be open without getting motion blur. This allows you to set the camera to take a better color photo in low light conditions.

Click here for a downloadable PDF of our advice on license plate capture.