Why a NVR's bitrate is its Most Important Spec

Why a NVR's Bitrate is its Most Important Spec

Take a look at this 8 channel NVR from Amazon:

When recording a network camera in realtime, that camera take 30 pictures per second. 30 pictures a second is the standard for TV and movies; a lower framerate than 15 that will make video no longer seem fluid and more like a slideshow.

This NVR was originally made by [company name removed at their request], and is a great example of a seller being responsible in describing the product. He calls it a "8 channel 1080P NVR" multiple times.

This is the exact same NVR:

Notice how this seller is being less than responsible. You can't record 32 cameras at 1080P, but he tries to hide that by saying "with 1080p realtime live view." This means that you can watch each camera live at 1080P, but not record it at 1080P. 32 cameras (960 total FPS) can only be recorder at D1 (standard old-school square TV quality).

What's most baffling is that this is actually the same seller. The first time he is responsible selling the product for what it is - an 8 channel 1080P NVR - and the second time he's being misleading about the number of channels you can do at 1080P while trying to charge you more - for the exact same device. Maybe he doesn't understand the unit; maybe he is being malicious. It isn't our place to say.

What is important is that we help you understand how a NVR works, and what specs control this problem so that you can spot it and so you avoid being ripped off.

Why can an NVR record more cameras at a higher resolution and framerate, anyways?

The reason these [company name removed at their request] units cannot record at 1080P when more cameras are connected is due to the NVR having a low overall bitrate (incoming bandwidth capacity) of the processor. An average 1080p camera will use about 5Mbps for 30FPS video*, but many NVRs only allow about 2Mbps per camera. Unlike the rest of the industry, our NVRs are built with the latest processors and can do the full 5Mbps per camera. For example, our 16 channel Networker Pro NVR is rated at a total of 80Mb (5Mbps per camera * 16 cameras = 80Mbps), a lot of competitors are 32Mb and lower.

So, Here's a Table of the Bitrate You Would Need to Record in different resolutions*

*This table shows the bitrate for both H.264 and H.265 recording, so let's explain them both real quick. H.264 encoding is used by 90% of the products out there. H.265 is being adopted by some manufacturers in 2018, including SCW. H.265 reduces the bandwidth by about half. It also reduces the storage requirements of video footage and allows you to store 20-40% more footage on the same hard drive. H.265 (like H.264 before it) is the result of a collaboration between Apple, Microsoft, and The Moving Picture Experts Group.

Why does this matter?

So, a "1080P" unit that can only record at 720P when all the cameras are connect is recording less than half the resolution it promised.

A "1080P" unit that can only record at D1 when all the cameras are connect is recording a 16.6% of the resolution it promised.

How to Spot a Low Bitrate Rip Off

One big red flag is when a seller won't tell you the total bitrate.

The Amazon™ example is a bit more complicated as the seller makes it seem like he is as telling you the bitrate ("Bit Rate" is listed in the specs), but the bit rate he lists (48~ 8192kbps) is not meaningful in any way and is not the total bitrate (48~ 8192kbps is the range for which you can set an individual camera, not the total available.)

Sellers may put really strange things like this in their specs sheets as a way to confuse you and make it more likely that they rip you off. KBs are 1000x smaller than MBs. If the specs for bit rate are listed as a variable or as KB or anything else that is not what is shown in the table above, it cannot do 1080P 30FPS on each camera.

The other big scam is NVRs advertised as doing "Up to 1080P;" this is intentionally misleading language and does not mean that they can do all their channels at 1080P.

The last scam is to say "with 1080p realtime live view" which means that the seller doesn't want to say what it records at and is trying to misdirect you.

How pervasive is this low-bitrate problem?

This competitor's NVR cannot do 1080P video on all of its channels at the same time.

This NVR is sold on nearly every one of our competitor's websites. It is originally manufactured by [company name removed at their request] it can be sold without the logo (or with a different logo), but the case should be similar. It can only record 1 out of every 4 of its channels at 1080P; the rest are at Standard Definition. 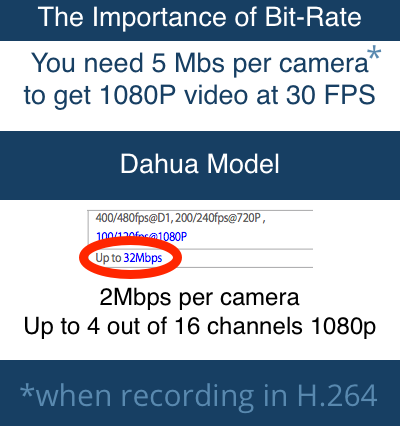 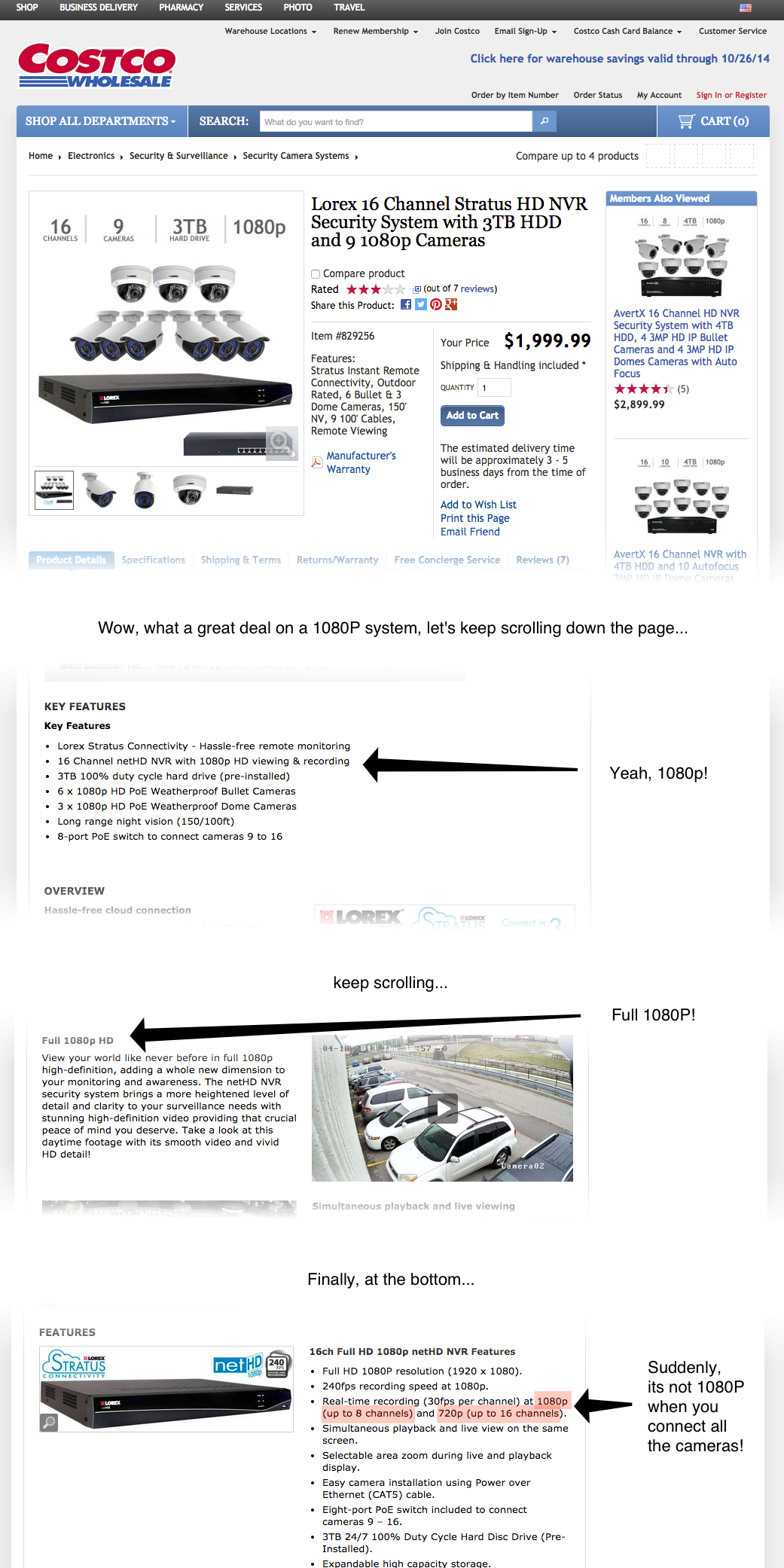 Sample Footage from Our NVRs

Our NVRs have True 4K Quality on Every Channel

While many other providers offer NVRs that can't actually deliver 1080P video on every channel, SCW Admiral and Imperial lines can do 4K at 30 FPS on every channel. Don’t waste your money on 1080p cameras and pair them with an NVR that can only take advantage of a quarter of them, and don't limit yourself to just 1080P. 4MP (2x1080P) is already quite reasonable and 4K has already come down in price compared to 2017, and will probably come down in price in even more in late 2018 / early 2019.

Make sure your NVR performs up to your expectations.

You may also be interested in our related guide on what happens when the processor in a camera is too slow.