What are non-contact fever detection devices?

Historically, healthcare facilities and businesses use contact thermometers to check peoples' temperatures. With the health risks involved and time required, this method can be hugely problematic in the situation that we’re facing.

We're excited to announce that we're now offering non-contact fever detection devices to screen all foot-traffic for fevers. These devices can help to create a more safe and secure environment for any location. Why? Because no one has to come into close contact with an ill person just to know if that person is potentially ill. Additionally, you can make sure that people with a fever who may be contagious can stay safe and head home. Each device works differently. Please keep reading to find out more.

Get back to business safely with fever detection devices. 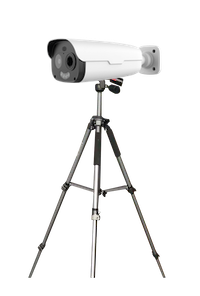 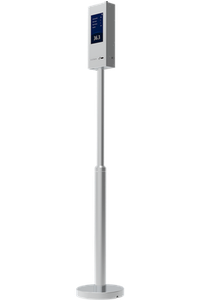 If these don't detect the Coronavirus and they're only detecting fevers, why does my business need one of these systems?

In the absence of widely-available, rapid coronavirus testing, fever detection devices are a tangible way to identify individuals who may have Covid-19 quickly. After the device notifies you, additional steps can then be taken. Fever detection devices cannot be your entire plan, but they can operate as a critical first line of defense. Identifying who has a fever can be an essential component within your risk and liability reduction plans.

Many businesses have already implemented plans that include regular temperature checks, often assigning a staff member to take and record temperatures as employees enter their premises. This strategy is not only costly from a labor standpoint but can be challenging to implement with current PPE shortages.

Fever detection is a manageable way to take precautionary safety into our own hands.

What kind of businesses should have a temperature detection system?

It is much easier to break this question down by device. We’ll discuss this below.

What kind of businesses should use The Delphi?

The Delphi, which is a Pole-Mounted, Contact-Free Fever Detection System, is excellent for employee entrances as it requires the most compliance from the person being tested. The Delphi is a great solution for businesses with low-to-medium foot traffic, such as:

What kind of businesses should use The Logos?

The Logos, which is a Contact-Free Temperature/Metal Detection system, is excellent for customer entrances that form natural choke-points where you can funnel people into an area. Even though both the Logos and the Delphi require you to hold out your wrist to check your temperature, the metal detector design makes it more evident that you need to go through it, so more people know what to do and comply. People are used to having security intervene if they don't go through a metal detector; people may walk past the Delphi because they haven’t been trained to use it yet. The Logos strikes people as something a bit more familiar. The Logos is great for:

What kind of businesses should use The Apollo?

The Apollo is an In-Motion Temperature/Fever Detection Thermal Camera System and requires no compliance. It scans multiple people as they pass through an area and doesn't require them to do anything other than going about their business. Apollo is great for:

How accurate are fever detection devices?

All of these systems are accurate up to one half of a degree Fahrenheit.

This doesn't mean that they are equally accurate, however. To understand the differences in accuracy with these devices, let's first talk about what they measure.

When you go to the doctor and get your temperature taken, they might put the thermometer in your ear or mouth. Both of those tests have a different temperature range for regular and for fevered.

In a security setting, you won't be inserting something into someone's body. That would be slow and, quite frankly, a little weird. You'll be taking a less intrusive measurement that deals with the outside of the body. It’s important to understand how these readings can be different than the inserted kind when making a plan for proper action in the event of a detection.

Both the Logos and Delphi measure wrist temperature, which is usually a little colder than your internal temperature by about half to a whole degree, making normal between 98.1 and 97.6 degrees.

The Apollo measures face temperature, which has its own challenges. Let's pretend a 100% accurate thermal camera existed. Even if that camera were reporting a face that genuinely is 98.6 degrees as 98.6 degrees, that person's internal temperature might be as high as 99.8 degrees, which is considered fevered. Faces usually are one half to one degree colder than your core body temperature. Although imperfect, this can still be a solid place to start when it comes to knowing if someone is potentially sick.

Is it legal for me to screen my employees for fevers?

Before the COVID-19 pandemic, companies couldn't perform medical exams on their employees under the Americans with Disabilities Act. But, the Equal Employment Opportunity Commission (EEOC) waived those rules for the pandemic. Now businesses are legally allowed to check their employees' temperatures and ask about the status of their health within the parameters laid out by the EEOC.

What are the HIPPA implications? Do these devices store personal information about my employees?

These devices do not store any of your employees’ personal health information, so they do not violate any HIPPA laws.

What should I do if my device detects someone with a fever?

At this time, the CDC is not advising on how you should proceed after a fever is detected. Every industry should determine best practices.

Some of our customers have told us that if they detect someone with a fever, they ask that person to go into an isolated area. In that area, they recheck their temperature. After a second reading, they decide on how to move forward. Be aware this information is anecdotal and we share it only as a jumping-off point. All companies will have different plans, specific to them, that promote the health and safety of their employees and customers.

Are there individual businesses that are required to screen for fevers?

At this time, the CDC does not require individual businesses to scan for fevers. However, every business should have a Coronavirus mitigation plan. Right now, the CDC says, "screening employees is an optional strategy that employers may use."

Can fever detection devices be set-up outside?

No. Fever detection devices are only made for indoor-use (this is due to the strict temperature requirements).

Because these are three different devices, they each have different set-up requirements and guidelines. Please see the installation guides for the Apollo, the Delphi, and the Logos below.

With any temperature products, it's important to follow installation and environmental guidelines. Please note the following information for the Delphi.

The Delphi alerts locally on the screen and with sound. We recommend that someone be within earshot to see/hear readings and prevent entry if necessary.

Non-contact wrist measurement should be between 1-3cm.

The Delphi must be installed inside in a windless environment for accurate readings.

The inside temperature must be between 59°F and 86°F.

With any temperature products, it's important to follow installation and environmental guidelines. Please note the following information for the Logos.

The Logos alerts locally on the screen and with sound. Your metal detection attendant should be within range to see or hear alerts.

Non-contact wrist measurement should be between 1-3cm.

The Logos must be installed inside in a windless environment for accurate readings.

The inside temperature must be between 59°F and 86°F.

The system includes a Blackbody, a device that emits temperature for the thermal camera to calibrate to and maintain accuracy.

Having consistent environmental temperature is the most crucial aspect of maintaining accurate temperature readings.

Avoid heating or cooling ducts in the field of view of the thermal image or near the blackbody.

Avoid big glass windows or entrances that may get high temperatures.

Speak with an expert: