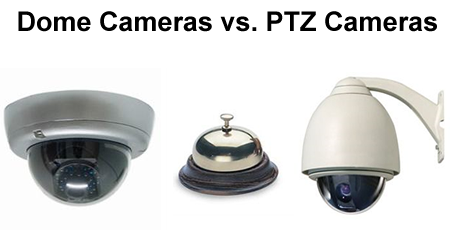 What are the differences between these two security cameras? They both look like domes, right? Both security cameras are great in design, and appeal. However, they have major differences. Those differences start at the insides of the cameras. PTZ security cameras have a super brain inside their smoked-color domes. The brain of a PTZ camera has artificial intelligence. Most PTZ security cameras have to be manually zoomed in and out. They also pan both left and right. Seems that compared to regular dome security cameras they are just far more advanced. Dome cameras have the ability to have a fixed lens or a varifocal lens built into the base of the dome. Dome cameras can never be manually controlled. They can never be zoomed in and out or panned side-to-side. There are many different sizes and styles of PTZ cameras. PTZ security cameras can be made into "recess-mounted" domes. They are so small that they look like dome cameras. With their smokey domes, it would be hard to know if the dome was looking at you, or that it is zooming in and out. Recess-mounted PTZ cameras could fit into residential communities and never be reported because they are so small. Just know that when trying to compare these two cameras it is not even a contest. Dome cameras are just not in the same class as PTZ cameras. When you look at the price tag between the two, you can understand why they are in separate classes. When it comes to surveillance systems it really does not matter which camera is more powerful than others. It is about what it can do in an overall security set up. For example, if you have an indoor CCTV set up, then having PTZ security cameras will not do you much good, in that they are too powerful. Instead, a collection of fixed dome cameras with a 3.5mm lens will do better. PTZ cameras are meant for an entirely different purpose. So you can see why we can say, the fight between which camera is the best becomes a no contest. In the end, neither camera can out-do the other. Choosing the right camera depends on what you need to accomplish in your security needs. But for the record PTZ cameras have the best technology, and are far more superior to dome cameras. However, dome cameras are more versatile and are cheaper than PTZ cameras. So we declare this bout a "no contest"!