CCTV-Reviews.com has a lot of negative reviews about a slew of security camera system retailers but suspiciously has nothing but glowing praise for only one company: Backstreet Surveillance.

The founder of Backstreet Surveillance just happens to own the CCTV-Reviews.com domain.

The reviews on the CCTV-Reviews.com website look remarkably fake.

There's been an explosion in fake reviews in 2017 - Time magazine, Inc Magazine, and NBC news have helped raise awareness of this new "marketing method."

You can search twitter for the hashtag #fakereviews and see thousands of comments about fake reviews.

Companies are creating fake reviews to promote products by saying a bunch of positive things about them that may not be true or maliciously attacking other companies to make the other company appear to have poor service or bad products.

There are numerous lawsuits cracking down on fake reviews, but most are still ongoing. In many cases, the competitors who generate fake reviews of other brands are being sued for defamation. As with most lawsuits, merely getting sued can be so expensive that the risk is not worth the benefit. Here are some high profile and expensive cases:

Amazon cracks down on fake reviews with another lawsuit

Could a consumer get sued for writing a review?

No, consumers cannot get sued for reviewing. Real reviews are generally regarded as opinions. If you don't like a product you can say so. The common threads in most review-based defamation lawsuits are the financial motive of the reviewer and the number of reviews. Writing a negative review about a company you actually purchased something from is very different than making tons of "independent" comments harming someone else's reputation and then attempting to financially profit from that harm.

The proof is in the DNS pudding. The internet functions because of the Domain Name System (DNS) which allows you to type in a website and connect to the content you're looking for. Most of the records on website ownership are public, so you can look up who owns which site.

This is who owns Backstreet-Surveillance.com

This is who owns CCTV-Reviews.com

Also, in case the JD vs James thing is throwing you off, here's a press release from Backstreet showing that JD Cawley's first name is James, and that he is the owner of both domains.

2. The reviews on the CCTV-Reviews.com website look remarkably fake.

1. There are a lot of negative reviews about nearly every brand on that site, except one, Backstreet, which has mostly positive reviews (5 stars for backstreet; 2.1 stars on average for everyone else, at the time of writing this post).

2. Some of those negative reviews about other brands specifically mention how much better their experience was at Backstreet, something that we saw for no other brand on the site

This is a review of the company "CCTV Security Pros" and miraculously, the review found a way to bring the conversation back to Backstreet Surveillance.

This is a review of the company "Shopping CCTV" and again, unnaturally, the review even has a link to Backstreet Surveillance.

3. When you fill out the form to leave a review comment (which is not the same as the star rating system oddly enough), it asks you to put in your name, email address, website, and comment. Reviews don't always ask for this, but when they do, you should expect to see websites like "dougsbigrigs.com" or "snyderelectrical.com" - you know, places where people actually work. Most of the reviews on the site say "your website" or the website of the company that they are reviewing. This is highly suspicious.

1. Most review sites have a customer care system. This allows the brand to respond to a poor review in order to solve the customer’s needs and make everyone happy. There doesn’t even seem to be a way for brands to log in at CCTV-Reviews.com.

2. There's no way to add a brand to get reviewed. (SCW and many other companies are not mentioned at all).

3. Each brand has a write-up but there's no clear way on the site for a brand to control that write-up. There's also no contact info listed on the site at all (the email button subscribes you to a mailing list). 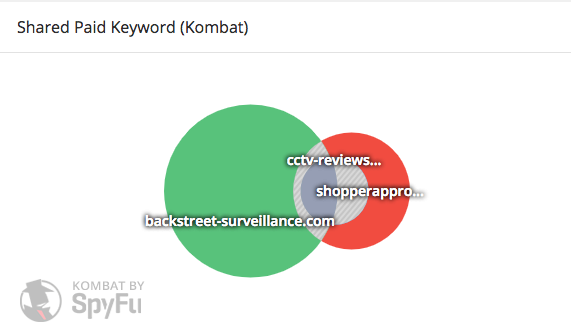 2. When you search one of Backstreet's competitors in Google, you get an advertisement highlighting a CCTV-Reviews.com review telling you to buy from Backstreet instead (we have no affiliation with CCTV Security Pro's and picked them at random). 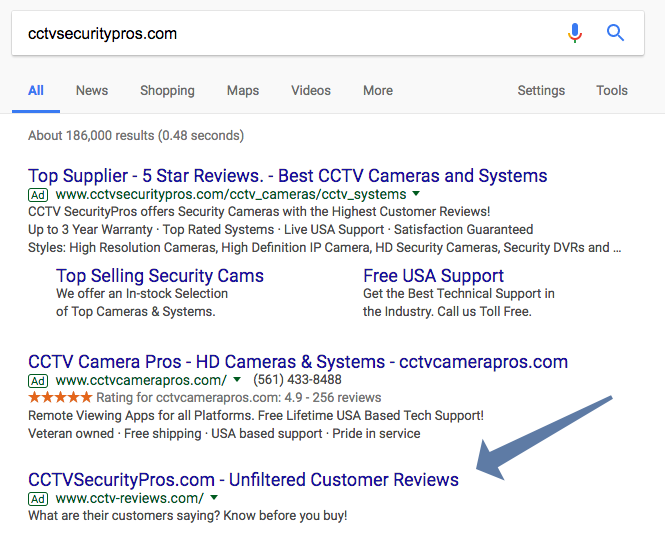 Get the exact review we showed you before, telling you to buy from Backstreet instead of CCTV Security Pros:

3. Most review sites sell their services to companies and their advertising revolves around trying to recruit companies to sign up, not convince customers where to shop.

4. It has Drastically Different Ratings Than Those on Reputable Review Sites

Google Reviews is a legitimate review site. Here are the legitimate reviews of CCTV Security Pros, a competitor to SCW with whom we have no affiliation. You will notice a dramatic difference between the legitimate Google reviews from the CCTV-Reviews.com critique. On Google, consumers can view the good and bad things that others have written in a review of their experiences with the company. In comparison, on CCTV-Reviews.com, the whole negative comments appear to be a vehicle to push the one review telling people to shop at Backstreet - the same review used in CCTV-Review.com's advertising campaign.

The CCTV-Reviews.com site is using a plugin from Rating-Widget.com to calculate the ratings. Rating-Widget.com doesn't have the security that most customer review sites have, like verifying reviews with order numbers and limiting reviews to one per computer. This rating widget is ripe for exploitation, so we decided to experiment a little.

We picked the company "Shopping CCTV" because that company has already changed its name and because it had 100% bad reviews and was at the bottom of the list. We wanted to see if a positive (5 star) review for anyone other than Backstreet would even be saved on the site (which it was). We also wanted to see if the site was ordered by review rating, so we gave "Shopping CCTV" 40 positive reviews. They stayed in the last place.

Reputable review sites prevent this sort of brigading of reviews.

If we can create a bunch of fake positive reviews, you can make tons of fake negative reviews.

You can also see a user on this black hat forum (black hat refers to web marketing that ignores ethics) recommend Rating-Widget.com when another user suggested "some fake star review plugin."

It's about the industry, stupid!

We want to make it very clear that SCW is not mentioned at all on CCTV-Reviews.com. Nothing negative is being said about SCW on that site, and we have no connection to Backstreet, CCTV-Reviews.com, Shopping CCTV, CCTV Security Pros, or anyone else listed on the CCTV-Reviews.com website (at least when we published this post).

Our "Exposing the Surveillance Industry Shortchange" series isn't just about our reputation. This series is about cleaning up the security industry as a whole and preventing customers from being taken advantage of. In this instance, that means coming to the aid of some of our competitors.

In this particular instance, it is our opinion that Backstreet's Founder needs to be called out. He should shut down CCTV-Reviews.com or add a disclaimer to the top of the site (similar to what honestmattressreviews.com had to do) disclosing his ownership, and CCTV-Reviews.com should be required to link to the actual reviews of the company's whose brands it is injuring.

At some point after we published this report, the CCTV-Review.com site was taken down. We applaud this move.

This post was originally published in December of 2017; this update was written in November 2018. In a letter that the lawyer for Backstreet Surveillance sent to SCW, he indicated that Back-street (sic) was acquired in March of 2016 from Plan-E Inc. He asserted that Plan-E or its affiliates have no affiliation with CCTV-Review.com. They also said that "Cctv-reviews.com is a non-operational website which ceased operations in October of 2017, according to our search of publicly available data bases (sic). Plan-E, Inc., dba Back-street (sic), has never created a review for cctv-review.com, not referred a customer to submit a review to cctv-reviews.com."

Since CCTV-Review.com, was still available online in December 2017, when we authorized this post, we have reached out to the lawyer for clarification as to the claim that it "ceased operations in October of 2017." Since ICANN (the domain name registrar) lists the current owner of Backstreet-Surveillance.com as Zepher Media Corp and not Plan-E, Inc., we also seek clarification on who the owner of the domain is as well. We will update this post when we get a response.

We selected CCTV security systems Pros to serve as an example by random selection. The other businesses with reviews on CCTV-Reviews.com also deserve to have their names and reputation cleared, but this post was already long. As part of creating this post, we have reached out to each brand to make sure they are aware of the site, its comments, its ownership, and how their reputations are being affected.

We obviously compete against the companies badmouthed on CCTV-Reviews.com, but we are committed to competing fairly and ethically.

Fake Reviews of any kind are unethical and destroy consumer trust. SCW doesn't engage in this sort of thing.