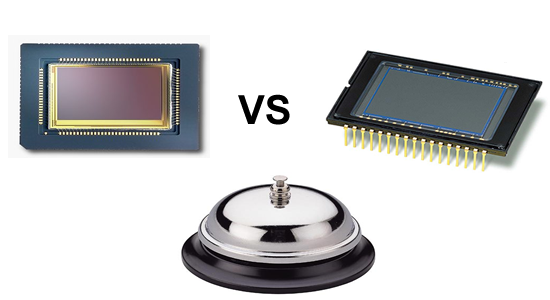 So what are CCD and CMOS sensors? CCD sensor first stands for coupler charged device and cmos sensor stands for complimentary metal-oxide semi-conductor. They both work in the same way and convert light into electrons. Once the sensors accumulates enough charge, which is very small charge and only takes a nano second to do it, the chip-set's pixels then receive that charge and passes it along in a particular manner, each sensor does it differently, and sends it to it's circuit board for processing.

Now on to the about:: There is really no major differences between the two that out weigh each other. There are strengths and weakness between each model, however, one is efficient for the task of video surveillance. For example cmos chips are cheaper to produce. However, ccd chips are more efficient in their management of extreme amounts of data. In the case of surveillance large amounts of images, which are large signals needs to be processed consistently. Now cmos chip-sets, has more bells and whistles than a ccd chip-set. It has its own charge-to-voltage conversion, amplifiers, noise-correction, and digitization circuits..... you get the picture. CCD chip-sets has, a more node to node voltage management system. After the analog image has been refined by this process, the ccd sensor sends the signal to the circuit board, where it is then digitized and sent to the video cable for viewing. So you can see that both sensors to do the same job. In fact, neither one can really out do each other.

So which one wins? Know the CCTV industry is unique business. First, most of all the applications that arise are very different from another. Each application arises from problems and situations in life. As humans, we often need help to carry out our lives. So in the efficiency business, the best technology is not always the right tool for certain applications. Nevertheless, this bout goes to the ccd chip-set. There are many other forms of technology where the cmos chip set wins. In photography the cmos sensor is catching up to the ccd sensor and wining. The outcomes of the images a cmos based photographic camera can produce is way better than a ccd sensor. So now you can see where applications play a huge role in selecting which image sensor is the most useful to accomplish a task. So in the task of surveillance the ccd chip-set wins. It's ability to manage the voltages that pixels collect from light is best for constant image digitizing. This process is important especially in delivering the highest quality of video to the end user. When looking at a security camera now you know why almost all specs will say "CCD Image Sensor". If you see a spec for "CMOS Image Sensor" stay away from integrating it in your CCTV setup. You need consistency and quality to cover for events that randomly appear in most security applications. Cmos sensors offer quality not consistency. That makes it a weakness in the surveillance world. Weakness are not something that exist in the business of capture real-time video.