Don't stop the pressure. Although the Canadian government has promised to reverse the decision, they haven't done anything yet. Keep hitting http://www.antiubb.com/what-can-i-do/ hard! The goal isn't to “do something” (quoting the interior minister). It's to stop regional monopolies from destroying entire segments of the world economy. For all we know, "doing something" might just mean adding a few more GBs. It's to pass legislation that prevents companies with the “pipes” from using their power to unfairly restrict competition.

The metered bandwidth decision was and always has been about Netflix, iTunes, torrents, and other threats to dying media business models. From CRTC to Comcast, here in the states, the international business community must fight back against the monopolies who (for the most part) ran their cables on the back of public subsidies and now want to dictate how these pipes are used. We broke up big-Bell, it's time to do the same here.

Here at SCW, we have been very concerned with bandwidth caps. We've been called innovate for our work with CanadianDownload.com, but we aren't; we just hearkened back to old school business models. Bandwidth caps reduce innovation; they don't increase it. Also for all the talk of “smarter way to ship data,” we have to state that we want this business model to fail. Although there is a need for this type of service in places like South Africa, Australia, and many other parts of the world, more innovation will be possible with an open and accessible Internet than with the “innovation” associated with bottling it up and shipping it.

The actions by ISP monopolies puts all online business at risk – and not just services like Netflix, imgur, and iTunes. In a world of metered bandwidth, low bandwith versions of sites will have to be created -- which squashes rather than creates innovation. Furthermore, this puts any site that serves online advertising at risk. If you bandwith is metered, who could blame someone for using tools such as ad-block-plus to take more control of your bandwidth allowance. This translates to a direct reduction in revenue for sites that support themselves via advertisement. The saddest part of this is that even the portal sites for ISPs, (where you can see your bandwidth usage), show ads.

Lastly, the CRTC cap, and policies like it, make hosting small sites on a home server impossible and increases the costs to start a business. Many companies, ourselves included, have, at certain times, used a home server to host small websites in order to keep costs down. We still use one to test and develop websites that aren't ready to go live. We served 7 GB of data yesterday from our one page CanadianDownload.com site (and another 11 GB from SCW), had over 150,000 visitors to CanadianDownload.com, and downloaded well over 100GB of requested data in the form of linux distros, open source software, software updates, and compiled wikipedia articles. Even a site designed to not use much data can push you over the cap.

We are committed to keeping CanadianDownload.com free even though we have lost money at it. (Although we have heard a few pitches on how we should or could creating a business model to move data all around the world and may take that on – shipping to somewhere else in the world would be way too expensive).

Canada, you hold all our fates in your hands. It will help us stop this and this. Take a cue from our Egyptian brothers! Keep up the pressure! Keep up the protest. Demand the resignation of the CRTC Chair. Break up the new Bells.

-Those two regular guys from America 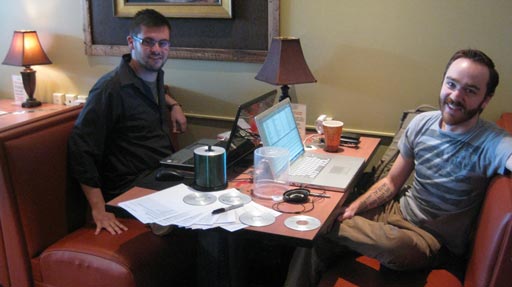