What is a Network Video Appliance

What is a Network Video Appliance?

If enough sneaky marketing executives call a POE NVR an "HD Video Appliance," is it still a POE NVR?

Yep, but now they are going to charge you double.

Some companies have begun saying "We provide Network Video Appliances, not NVRs, and you can't compare the two," but they really are the same thing. 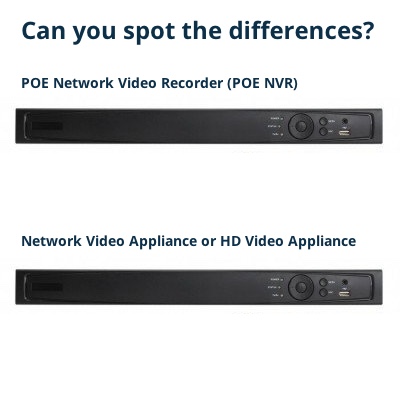 What is a Network Video Appliance?

Of course, that's exactly what a POE NVR is too.

A POE NVR has POE ports like a POE switch, internal storage, a user interface to watch the video feeds in person, and a web-server for your to access the video feeds remotely.

Why claim that a Video Appliance is so different from an NVR?

The companies using and making up these "video appliance" names, largely go after the enterprise-level market. Enterprise clients often do use different products. Our enterprise Executive line of NVRs is aimed at a very different type of user than our Vanguard series NVRs, for example. The Executive series, not having the switch built into the case, allows network engineers to have more control over their networks and has different models ranging from 32-256 camera installations. These Executive series NVRs give enterprise customers a bit more control of their network data. A POE NVR on the other hand "just works" out of the box.

But sometimes, even enterprise clients want modular installs in specific areas or locations that "just work" without a lot of set up. For example, a multi-billion dollar company may want an easy to install and maintain video recording solution at each franchise location where there won't usually be a network engineer on-site and may not have one there for the install either. That sort of solution has historically been called a POE NVR.

The companies using these "video appliance" names want to charge these larger clients more money for their products, but they don't want people comparing features with other providers, so they ignore industry standards and norms and come up with their own lingo..

The term "Video Appliance" exists for no other reason than to try to create the illusion that you are getting something different than an NVR. But you aren't.

Bottom Line: There are no hardware or software differences that separate POE NVRs from Network Video Appliances.

P.S. The name is really terrible, isn't it? Calling it a "video appliance" makes it sound like a dishwasher, not a professional, enterprise-level network video recorder.