Intrusion Detection with the Admiral and Imperial NVRs 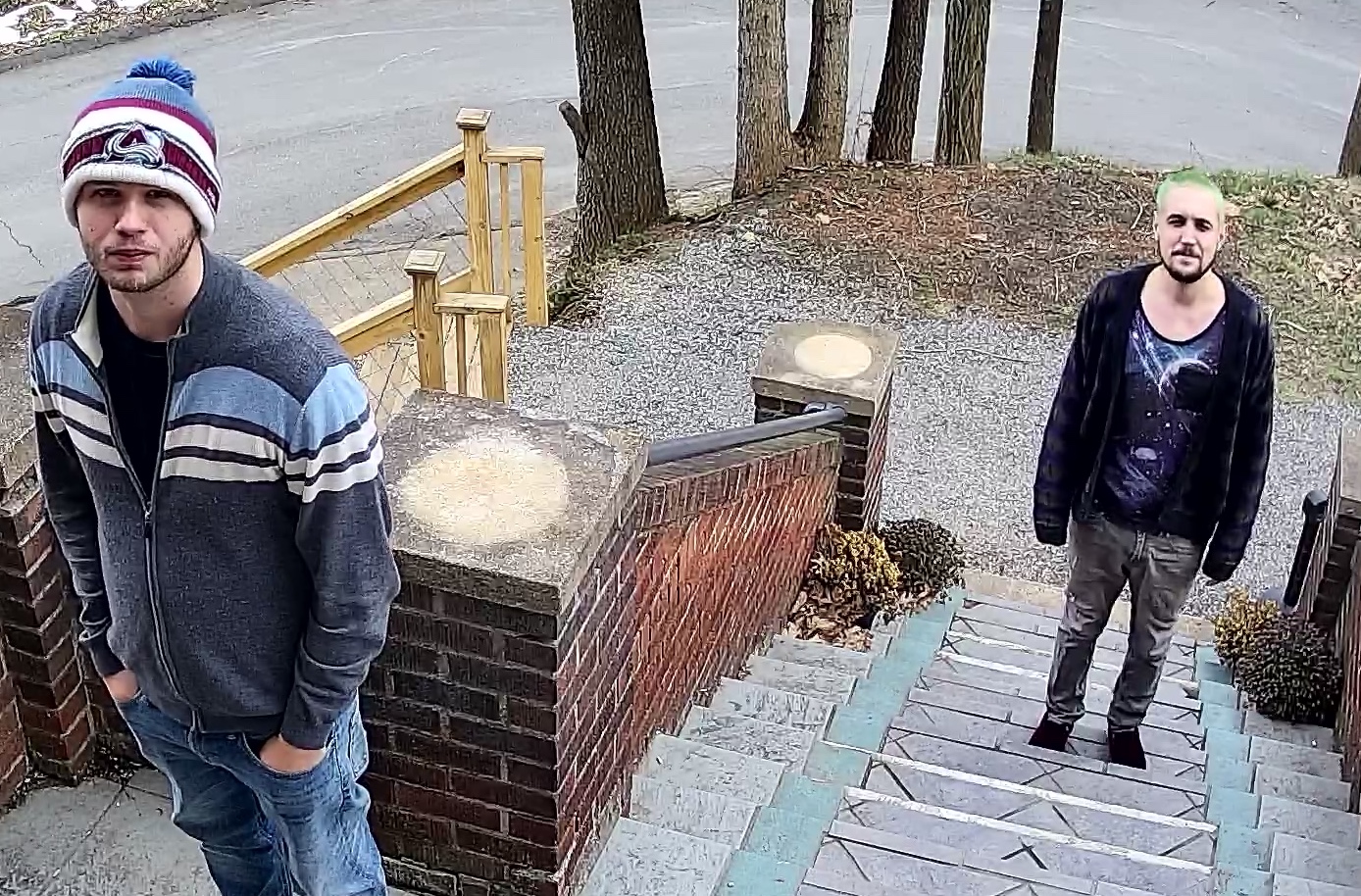 Intrusion Detection detects objects that move into an area and stay beyond a configured time. It will allow you to create a custom area in an image that will record or alert you when anything or anyone is an area where they are not wanted. You can specify up to 4 areas. Objects that stay motionless in the area beyond 80 seconds are defined as background, and will be detected if the object moves again. As with other detection settings, you can search through the daily events after they’ve happened.

Scenarios where you would use Intrusion Detection Video Analytics

Intrusion Detection is very useful for flagging people who spend time in areas of concern.

Intrusion Detection is often used to alert property owners of people spending time in areas they shouldn't. For example, anyone other than the homeowner or repairman spending extended time near an outdoor air conditioner or parked car is cause for an alert. They may be trying to disassemble the item and sell the parts.

Intrusion Detection is very useful for alerting the property owner if someone is in a restricted access area:

For homeowners, intrusion detection is often used with backyard cameras, for such things as watching a prized new barbecue, or alerting the homeowner to unwanted guests using a covered pool or hot tub in the middle of the night.

For businesses, Intrusion Detection is also frequently used to alert management if anyone enters a restricted area (such as a stock room, medical supply room, or sever room) at a time when the shouldn’t, by combining Intrusion Detection and Alert Scheduling. This feature is also used to monitor “No Parking” zones outside of a business. Some businesses have electrical boxes in general access areas that people shouldn’t be approaching regularly.

Intrusion detection requires an area that does not have objects in motion. As with our earlier example of the pool, if that pool were to be uncovered, reflections or ripples in the water could potentially set off the intrusion detection. In the same way, if you want to monitor an air conditioner, it is best to do so from more of a side angle than top view, as the top view may catch the motion of the fan spinning. You may also want to designate the entrance areas around your pool or air conditioner as the intrusion zone to reduce false positives. Accuracy is highly depending on installation environment and settings.

If you’re looking at an area that objects are constantly passing through but you’d like to know if an object has stopped somewhere it’s not supposed to, intrusion detection is not for you. This feature will be best utilized with an area that is expected to have little to no intrusions regularly.

How to Configure Intrusion Detection

Login (images are from the webview login, but you can also do so from the NVR itself) 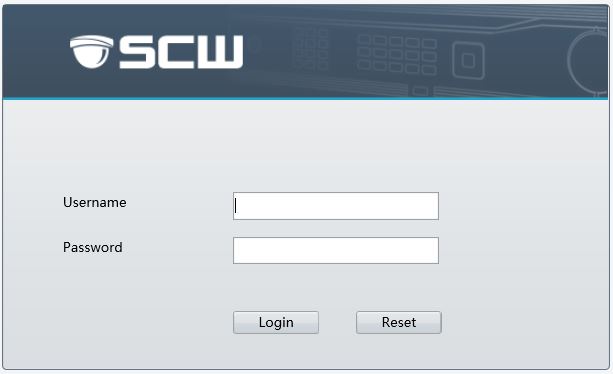 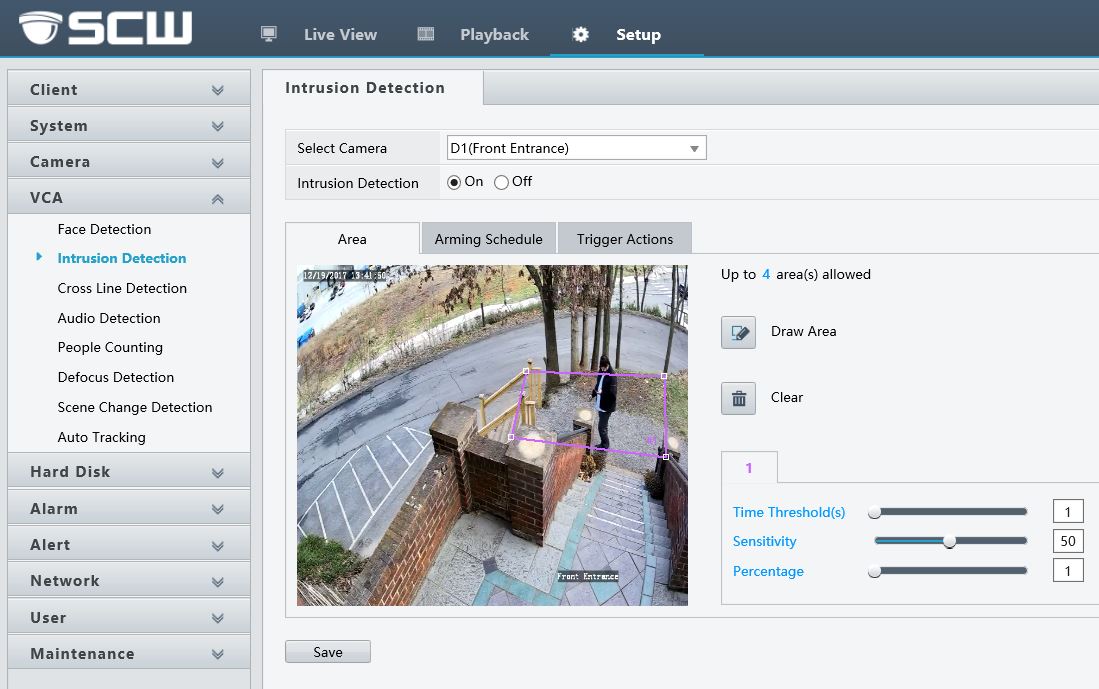 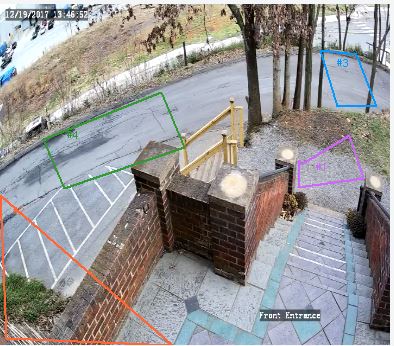 Choose how long a object or person can linger before you are alerted. If you are concerned with loitering, set this longer, if you are concerned with access, set it shorter. Set your sensitivity and percentage to match how large of an object / person matters and how sure the NVR needs to be before it alerts you. (If you defined multiple zones, each number/color corresponds to your zones). 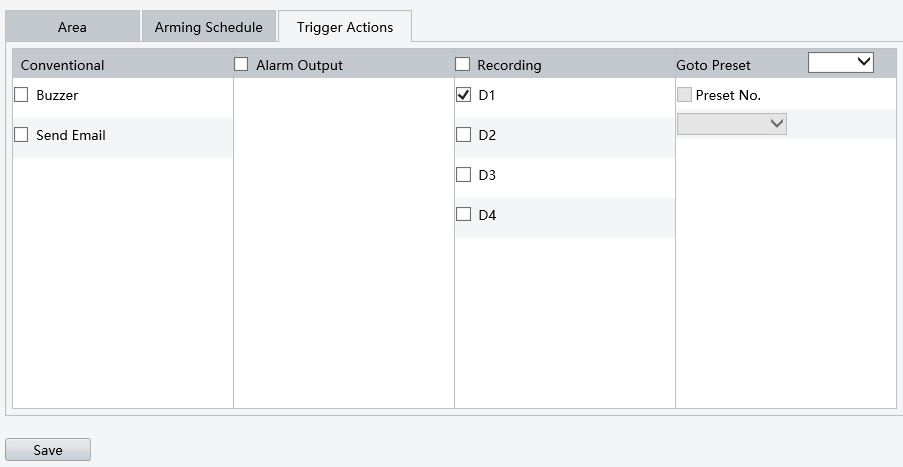 SCW Support is Here to Help

Video Content Analytics features are complex, in their infancy in terms of product development, and are sometimes difficult to set up. The Intrusion Detection feature, in particular, generates lots of false positives if set up in an area with lots of movement. If you want help setting up any of our Admiral NVR Video Analytics Features, you’ll find that the tech support team here at SCW is here to help. We can assist you with optimize any of our VCA features to work in the best way possible for your application.

Intrusion Detection is available on these NVRs when combined with SCW Admiral Line Cameras: